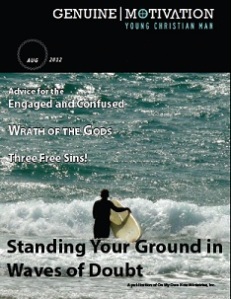 Click here for the page-flipping format of Genuine Motivation

What would we do with three free sins? Before you answer, let’s make sure the rules to this game are clear. Although we would still have the possibility of suffering consequences for the three nasty things on our lists, no matter what we do, we won’t owe God jack. Regarding these three sins, the slate would be clean. They wouldn’t count against us at all. They wouldn’t even show up on Santa’s list. So now, do you want to play? …READ MORE

Atheist Richard Dawkins, a renowned evolutionary biologist and no friend of Christianity, wants people to read the King James Bible but for different reasons than you might think… READ MORE

Pray this prayer. Ask Jesus
into your heart. Accept Jesus as your Savior. Does any of this sound familiar? These are what you tell someone who wants to be a Christian, right? The vast majority of evangelical Christians would answer that question with a resounding, “yes.” Yet, none of these questions are found in the Bible…READ MORE

Wrath of the Gods

After seeing the inevitable and long-awaited sequel to the “Clash of the Titans,” I couldn’t help but be amazed by the long-lasting love affair we have with this once great but false religion. I admit to having been intrigued by Greek mythology in my youth, but then again, who wouldn’t be…READ MORE

2 thoughts on “Aug 12 Genuine Motivation is Out!”