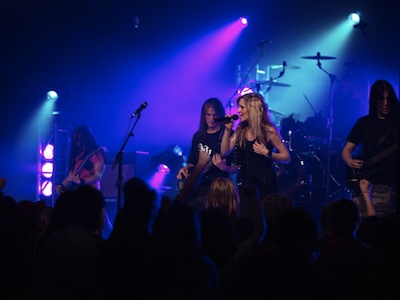 HB is a Christian band from Finland—don’t worry, they have English lyrics. The band formed in 2002 and has since been consistently creating new and original music. “Frozen Inside,” released in 2008, is the English version of their second full-length album called “Enne.” They usually produce both English and Finnish versions of their albums because they have such a wide audience.

That’s cool, but the question is: What do they sound like? Actually they don’t sound very Finnish—whatever Finnish sounds like. Their vocals are perfectly intelligible and aren’t hindered by an accent that makes it hard to understand. Except for the occasional odd wording, an average American might go away thinking the singer was British.

Musically, they’re like a female-fronted band, like Red or Skillet, but with a more bombastic, orchestral feel. Trans-Siberian Orchestra is another similarly sounding band. HB can also be compared to secular gothic metal acts like Nightwish, Within Temptation, or Lacuna Coil. All of these consist of basically the same mix: female singer, symphonic string passages, choirs and heavy guitars. However, HB offers positive, Christ-centered lyrics, as well.

For example, one of their most popular songs, “God Has All Glory,” opens with stringed instruments followed by choirs while guitar chords build the song into a bold wall of sound. This crescendo is then graced by beautiful, female vocals singing glorifying lyrics to God. Some of the songs could almost be praise songs sung in a church if put to different music. They usually have lyrics that proclaim God’s power and wisdom while proclaiming the importance of Jesus’s sacrifice for us.

Lyrically, the album touches on various themes of faith. Some songs call out to the unsaved asking them to turn to Jesus as the only One who can complete their lives and save them. Other words beacon unbelievers to open their hearts to the

One who loves them just as they are and reminds them of how He is waiting for them to turn to Him and be set free.

Other songs by HB prompt the saved to live out their faith well and to be witnesses for Christ. “It Is Time” asks if we have become prisoners of our own comfortable lifestyles and encourages us not to forget the reason why God has put us here on Earth—to be His witnesses. The chorus of this song is a prayer to God to help us be obedient to Him as He’s called us to do.

HB includes other themes which deal with common trials in life, like the song “Years Go By,” which has a ballad feel containing a beautiful piano piece, or the title track “Frozen Inside,” where lyrics cry out to God like David did in some of his Psalms.
Here’s the final assessment: HB infuses scripture and godly themes with great music, making for unique sound which demonstrates the artists’ passion for Christ. If you like hard-hitting rock played by skillful musicians, you should check out this band!

Here’s a couple websites to get you started: www.hbmusic.net and www.myspace.com/hbmetal.