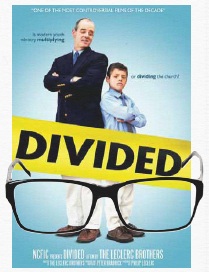 After watching the documentary film “Divided,” produced by the National Center for Family Integrated Churches (NCFIC), all Christians should appreciate one point: Parents should be intimately involved in the discipleship of their families. But really, have all youth programs resulted in a “50-year failed experiment,” as NCFIC Director Scott T. Brown proclaims? The biggest disappointment in this film was the divisive way in which “Divided” makes this claim.
The premise is that age-segregated learning commonly used from children’s church to Sunday school to youth programs was developed by atheists for secular education and then adapted to church, and as such, is not Biblical. Supposedly, adopting this strategy has provided the excuse fathers need to relinquish their responsibility to disciple their families. The movie goes on to say that since there is no direct mandate in the Bible for the nurture of teenagers through youth programs, it is not Biblical to use such programs, even when they do work. The movie also portrayed youth programs as generally failing to teach truth, while throwing a bunch of immature kids together with the hope that they will train each other.
The call to fathers everywhere to disciple their children is a message which cannot be encouraged enough. But let’s face it; fathers didn’t need youth programs to justify bowing out of their divinely appointed leadership role. It started in the Garden of Eden when Adam allowed Eve to lead him astray. This failing is clearly not, as this movie suggests, caused by faithful youth pastors who have given a large portion of their lives to the redemption and spiritual development of teenagers. The propensity exists now as it has for centuries. If anything, a historical and cross-cultural review might show that fathers of this generation are more involved in parenting than they ever have been.
The statistic that 88 percent of all teenagers in youth programs walk away from the Church never to return is alarming. But how accurate is that number? A “bias estimate” of 40 percent is also mentioned in the film. Regardless of which is more accurate, other studies have shown that many youth leave the Church, not necessarily because of their youth program, but because they found the Church boring and irrelevant to their lives. This can make the attractions of the world teens live in all the more alluring. And something the stats don’t consider is the numbers that leave the Church but return, after having discovered the truths they grew up with – some of which were learned in healthy youth programs – to be reliable.
Glance at the film’s website (http://www.dividedthemovie.com), and you can’t miss the statement, “Modern youth ministry is contrary to Scripture.” The film asserts that since we are not specifically told to use these ministries, we must abolish them. In fact, we are in disobedience to God even if these programs do work because they cannot be Biblical if they have pagan origins. Following this line of reasoning – as some do – we should not celebrate birthdays, Christmas or even believe in the best model we have for God: the Trinity. As for the Biblical support of their position, “Divided” ironically points to passages where Jesus calls the children to Himself. These instances supposedly describe the Biblical way fathers are to disciple their children. Yet, the primary passages where this happened (Matt 19:13-15; Mark 10:13 and Luke 18:15, 16) describe Jews bringing babies and little children to Jesus for a type rabbinical blessing and prayer – not for discipleship or teaching. While I wholeheartedly agree that these passages display the heart of Christ for young ones and that they should encourage fathers to love their own children with the same intensity, to say that they express God’s disapproval of modern youth ministries is tragic. Following the movie’s argument, Jesus should have pushed them away and instructed their fathers to disciple them, because He was obviously not their father, but He didn’t. In fact, if we consider that He often had young people hanging around Him, wouldn’t Jesus fit the mold of most youth pastors today? He did things differently than the parents and religious leaders of the day. He was a young man who was exciting to hang out with. NCFIC takes their stance too far regarding things which Scripture does not clearly address, such as the way we evangelize and disciple youth. Further, in Jewish culture, a 13-year-old was a young man, not a child. There is no primitive church equivalent for the man-child of today’s culture: the 13 to 18-year-old male who is old enough to reason and work like a man but still lives like a child in society.
Should we, as NCFIC suggests, eliminate youth ministries? Fathers are clearly called to disciple their families, but they need all the assistance they can get, including youth ministries which point young people to Christ. To discard all youth programs because some fathers have used them as a way out of their responsibilities would be like throwing the baby out with the bath water. Instead of embracing a new direction which destroys good methods with the bad, we need to answer the more difficult challenge of examining each youth program, every event, even individual lessons, if necessary, to ensure that every aspect of our youth ministries reflect Christ and His gospel.
Has God not commanded the Church to reach out and touch the youth of our world in a winsome way in order to draw them to Christ? Paul became “all things to all people so that by all possible means,” he might save some (1 Corinthians 9:22). Isn’t that the premise of most youth ministries? NCFIC sorely misses this parallel.

“Divided” can be viewed online for free at www.DividedtheMovie.com.

One thought on “Youth Programs: From the Pit of Hell?”