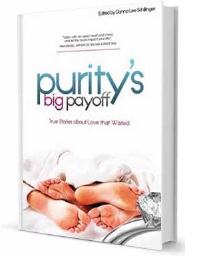 Purity’s Big Payoff/Premarital Sex is a Big Rip-off
The most difficult task in the life of a Christian single today is maintaining purity until marriage. The payoff is perfect love and sex, just as our Creator intended. But if that’s so awesome, why aren’t more people choosing it? And how can premarital sex be so bad if so many people are doing it and loving it? People who were virgins when they married aren’t usually the type to kiss and tell. And when premarital sex goes wrong, no one wants to Tweet it. This awkward silence from both contingents isn’t helping the next generation to decide well on the issue of premarital sex.
Purity’s Big Payoff/Premarital Sex is a Big Rip-off is a collection of 17 first-person narratives about successfully waiting for marriage to have sex – or not. Contributors on both sides of the issue candidly share in face-reddening detail what they learned on their way to the wedding bed. Young people aiming to remain pure will be encouraged and learn practical strategies for resisting sexual temptation. Those who wish they had waited will learn that it’s never too late to restore purity with God’s grace.
The following is an excerpt.

This story was excerpted from the new book Purity’s Big Payoff / Premarital Sex is a Big Ripoff, edited by Donna Lee Schillinger. A collection of 17 true stories about love that waited – or not! – for sex until marriage and the consequences of that decision. Learn more at PuritysBigPayoff.com. Now on sale at major online booksellers, through your local bookstore or for a special price of $12 plus free shipping at www.OnMyOwnNow.com, which receives as a donation half of the proceeds of its sales. Also available in Kindle through Amazon.com.
También en español: La Gran Recompensa de la Pureza / La Gran Estafa del Sexo Prematrimonial. Visite http://www.VivaLaPureza.info.