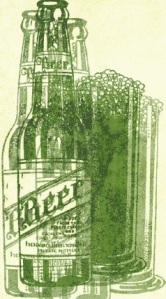 Today we raise a glass of warm, green beer to a fine fellow, the Irishman who didn’t rid the land of snakes, didn’t compare the Trinity to the shamrock and wasn’t even Irish. St. Patrick, who died 1,518, 1,550, or 1,551 years ago today—depending on which unreliable source you want to believe—has been adorned with centuries of Irish blarney. Innumerable folk tales recount how he faced down kings, negotiated with God, and tricked and slaughtered Ireland’s reptiles.

The facts about St. Patrick are few. Most derive from the two documents he probably wrote, the autobiographical Confession and the indignant Letter to a slave-taking marauder named Coroticus. Patrick was born in Britain, probably in Wales, around 385 A.D. His father was a Roman official. When Patrick was 16, seafaring raiders captured him, carried him to Ireland, and sold him into slavery. The Christian Patrick spent six lonely years herding sheep and, according to him, praying 100 times a day. In a dream, God told him to escape. He returned home, where he had another vision in which the Irish people begged him to return and minister to them: “We ask thee, boy, come and walk among us once more,” he recalls in Confession. He studied for the priesthood in France, then made his way back to Ireland.

He spent his last 30 years there, baptizing pagans, ordaining priests and founding churches and monasteries. His persuasive powers must have been astounding: Ireland fully converted to Christianity within 200 years and was the only country in Europe to Christianize peacefully. Patrick’s Christian conversion ended slavery, human sacrifice and most intertribal warfare in Ireland. (He did not banish the snakes: Ireland never had any. Scholars now consider snakes a metaphor for the serpent of paganism. Nor did he invent the Shamrock Trinity. That was an 18th-century fabrication.)

According to Thomas Cahill, author of How the Irish Saved Civilization, Paddy’s influence extended far beyond his adopted land. Cahill’s book, which could just as well be titled How St. Patrick Saved Civilization, contends that Patrick’s conversion of Ireland allowed Western learning to survive the Dark Ages. Ireland pacified and churchified as the rest of Europe crumbled. Patrick’s monasteries copied and preserved classical texts. Later, Irish monks returned this knowledge to Europe by establishing monasteries in England, Germany, France, Switzerland and Italy.

The Irish have celebrated their patron saint with a quiet religious holiday for centuries, perhaps more than 1,000 years. It took the United States to turn St. Patrick’s Day into a boozy spectacle. Irish immigrants first celebrated it in Boston in 1737 and first paraded in New York in 1762. By the late 19th century, the St. Patrick’s Day parade had become a way for Irish-Americans to flaunt their numerical and political might. It retains this role today.

The scarcity of facts about St. Patrick’s life has made him a dress-up doll: Anyone can create his own St. Patrick. Ireland’s Catholics and Protestants, who have long feuded over him, each have built a St. Patrick in their own image. Catholics cherish Paddy as the father of Catholic Ireland. They say that Patrick was consecrated as a bishop and that the pope himself sent him to convert the heathen Irish. (Evidence is sketchy about both the bishop and pope claims.) One of the most popular Irish Catholic stories holds that Patrick bargained with God and got the Big Fella to promise that Ireland would remain Catholic and free.

Ireland’s Protestant minority, by contrast, denies that Patrick was a bishop or that he was sent by Rome. They depict him as anti-Roman Catholic and credit him with inventing a distinctly Celtic church, with its own homegrown symbols and practices. He is an Irish hero, not a Catholic one.

Outside Ireland, too, Patrick has been freely reinterpreted. Evangelical Protestants claim him as one of their own. After all, he read his Bible, and his faith came to him in visions. Biblical inspiration and personal revelation are Protestant hallmarks. Utah newspapers emphasize that Patrick was a missionary sent overseas to convert the ungodly, an image that resonates in Mormon country. New Age Christians revere Patrick as a virtual patron saint. Patrick co-opted Druid symbols in order to undermine the rival religion, fusing nature and magic with Christian practice. The Irish placed a sun at the center of their cross. “St. Patrick’s Breastplate,” Patrick’s famous prayer (which he certainly did not write), invokes the power of the sun, moon, rocks and wind, as well as God. (This is what is called “Erin go hoo-ha.”)

Patrick has even been enlisted in the gay rights cause. For a decade, gay and lesbian Irish-Americans have sought permission to march in New York’s St. Patrick’s Day Parade, and for a decade they have lost in court. Cahill, among others, has allied Patrick with gays and lesbians. Cahill’s Patrick is a muscular progressive. He was a proto-feminist who valued women in an age when the church ignored them. He always sided with the downtrodden and the excluded, whether they were slaves or the pagan Irish. If Patrick were around today, Cahill says, he would join the gay marchers.

Now television has invented yet another Patrick. Last night, Fox Family Channel aired its made-for-TV movie St. Patrick. Fox’s Patrick is mostly drawn from the historical record, but the producers added one new storyline. The English parent church demands that Patrick collect its church taxes in Ireland. Patrick rebels and risks excommunication by the British bishop. The fearless colonist leads a tax revolt against the villainous English. We Americans, like everyone else, think St. Patrick is one of us.

David Plotz is the editor of Slate, an online news magazine. He is the author of Good Book: The Bizarre, Hilarious, Disturbing, Marvelous, and Inspiring Things I Learned When I Read Every Single Word of the Bible. You can e-mail him at dplotz@slate.com.